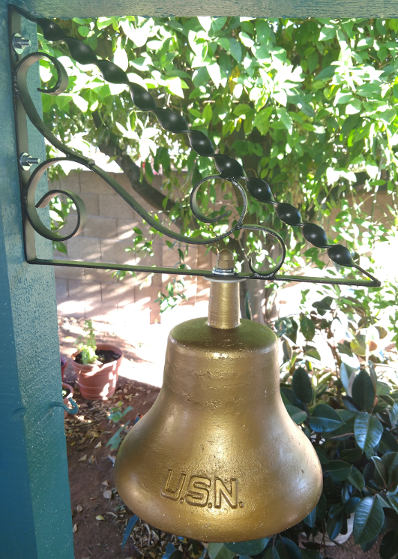 The bell is all done.

Even though most everyone would call it a “ship’s bell”, this is most likely a bell that was on (or destined to be on) some small unnamed vessel.  All of the ships’ bells that I’ve seen have the name of the ship cast into the bell and, as far as I know, they are kept by the navy when the ship is decommissioned.

To get a picture that shows the “U.S.N.”, I had to get up on a ladder and this “distorts” how high above ground it appears the bell is mounted.  I am nearly 6 feet (180cm) tall and I can walk under the bell without hitting my head, so the bell is much higher up than it appears in this picture.

When I told our daughter about the bell being struck for my brother’s and my birth, she asked if that was done for her.  I showed her my mom’s diary entry

As soon as we got home, <dad’s name> jumped out of the car and almost ran to the bell to tell the neighborhood of the birth of our first grandchild, a beautiful baby girl.  Fortunately it was daylight.

She went over and tried the bell.  It startled her…and she had a huge smile on her face.

The cast iron bell was “always there”.  I do not remember a time where it was not hanging from it’s bracket.

My dad said he struck it, in celebration, when my brother was born, and again when I was born.  That would have been over 6 decades ago.

My brother and I grew up in “the middle of nowhere” and when we were young, we were “restricted” to stay within hearing range of the bell.  The desert is quiet and the bell could be heard even a mile away, so the restriction wasn’t really that much of a restriction for a 8 or 9 year old.  In the days before cellphones, it worked quite well as a “communications device”.

My dad was a US Marine officer and my mom was a US Navy officer.  After each of them died, I went out and gently struck 8 bells–signifying “end of watch”.

When we were cleaning mom’s house in preparation for selling it, I took the bell home and stored it in the garage.  And there it sat until this past Monday.  On Monday I took the bell to a sand blasting company to remove the surface rust that had accumulated over the past 6 decades.

I told the sandblasting place that the bell was a family heirloom and asked if it could be done while I waited.  This wasn’t their normal practice, but we worked out a deal.  I would pay a non-refundable deposit to hold a place in line and when it was time, they would call me and I would bring the bell to be sandblasted while I waited.

Last night I put a coat of primer paint on it and, today, I put two finish coats, flat brass in color, on it.  The bracket that has always held it has been painted black, just like I remember it.

When the bell is mounted, I’ll post a picture.